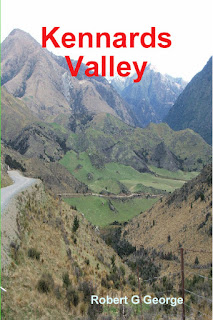 Trapped in a railway tunnel in a rock fall, or escaping from kidnappers in the company of a young woman.

That is the dilemma that Mike Standish faces.

Nineteen days after going missing, he comes out of a coma to tell the tale of a beautiful hidden valley, and a young woman that has also been kidnapped.

However, his psychiatrist tells him that it was all a fantasy. A story concocted in his mind to help him survive.

Which is the reality?

Mike struggles to unravel his own mystery, and uncover the truth about Kennard’s Valley.

Is the cover picture Kennard’s Valley?

That’s because Kennard’s Valley doesn’t exist; at least not as an actual place that you could take a picture of. This could be a good representation of the road into the Standish Homestead; well if that existed. In actual fact, this is a picture I took of the road leading into Lake Pearson. That does exist.

The story is set in the Southern Alps of New Zealand. The mountain peaks in the distance are typical of the ruggedness of the backbone of the South Island. It is definitely a representation of the peaks surrounding Kennard’s Valley.

It’s funny that although I had a rough idea of the scenario, the finished product is nothing like it.

There is a railway tunnel. I suppose it is a mental carry over from my first feeble attempts at writing.